One reason I love Chicago is the street fairs. There are street fairs going on all over the city throughout the summer. Last Saturday I went to the Custer’s Last Stand Festival in Evanston. It was conveniently nestled around the Main St. El stop, so it should have been simple to get to. 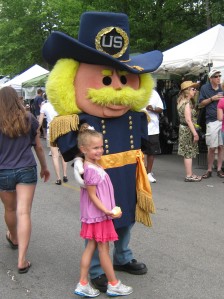 Even more pictures (and, incidentally, some more words) after the cut.

I say “should have” because there was maintenance at some northbound El stops–including my own. I had to take a southbound train 4 stops so I could get a northbound train. On top of that, there was a shuttle train running to some of the stops on that stretch–and it was running on the same track as the regular northbound trains. Now, it’s not like I had an appointment or anything, so I wasn’t particularly upset. It was just confusing, and confusion is a short step from frustration for me. It all just goes to show you need to plan ahead and leave plenty of time when traveling by public transit.

Anyway I got to the fair, and it was pretty impressively sprawling. For New Mexicans: there were more vendors than our State Fair usually has (including the Manuel Lujan hall). The weather was gorgeous: nice and warm with some storm clouds keeping the sun off. As a bonus, the threat of storms kept the crowd to a respectable level. I never felt hemmed in or uncomfortable.

In addition to people watching, fairs and festivals attract me because of their shopping, food, and performers.

It’s a good thing I have reasonable self control; else I’d spend all of my savings at every fair I visit. Homemade knicknacks made of old flatware, jewelry made of old watch parts, homemade soap, jewelry for all tastes (or lack thereof, in far too many cases). I’m not normally much of a shopper, but something about fairs unleashes my inner magpie.

Unfortunately, I have few pictures of the vendors’ wares because it’s generally frowned upon. But here’s one I was able to snap surreptitiously:

I’m a sucker for leatherbound journals. I did resist the temptation, however.

Although I resisted the urge to buy a journal I’ll never use, I couldn’t resist this bad boy:

Can that possibly be…

Yes it can, dear reader. And stored within are all the tiny electronic accessories I probably don’t want to lose. If anyone was somehow harboring the thought that I am not a ginormous geek, I just took that belief out back and shot it.  There was no way I could resist a hollowed out style guide to add to my stupidly large style guide horde! And it was only $6! (Least expensive style guide I own…) I feel it was a worthwhile investment. Incidentally (and I found this out long after the purchase), I bought it from the next door neighbor of an aunt and uncle of mine. Sometimes, Chicago seems really small.

Anyway, that was my only purchase, even though there were approximately infinity things  I wanted to buy. Now on to… 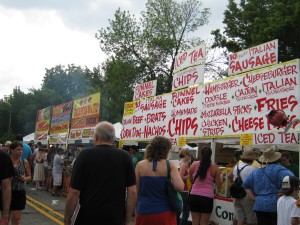 Food you’ll see at probably any fair in the US.

Yet, there was some fair food at this fair that would be totally unseen at a fair in New Mexico. Such as:

Typical fair food for Chicago, but not so much in Albuquerque.

I think at a New Mexican fair, gyros, pierogis, blintzes, and shish kabobs would be considered utterly foreign (har har har….). Do most New Mexicans even know what pierogis are?

Conversely, there was a decided lack of Indian frybread, enchilada plates, roasted corn, and tortas, which are staples at any New Mexican fair. There were churros, but Chicagoans have developed the bizarre practice of stuffing them with fruit. Like a fried dough stick with cinnamon and sugar wasn’t already perfection itself.

There was one bizarre food omission that really puzzled me. I didn’t see a SINGLE stall that sold turkey legs! I thought giant, greasy, delicious turkey legs were the prime example of fair food! Where is my turkey leg!? But there was this:

On the plus side, I didn’t actually see anyone eating it.

Since half the reason I go to fairs is for fair food, I had to eat. I settled on a disappointing gyro sandwich from the pseudo-Greek food stall pictured above. It had Ranch dressing instead of tzatziki! That is wrong on so many levels. The meat and pita were pretty good, but I think it was still the worst $8 (!) I ever spent.

And now on to the…

I love, love, love street performers. They’re all over the place downtown, and I always feel bad when I see them, because I don’t carry cash. But if I did, every single one would get a dollar in their hat. I think it takes a lot of guts to make your living by putting yourself in the eye of the frequently unadoring public day-in and day-out. Therefore, my focus here will be on the fair’s street performers. There was music, and it was quite enjoyable, but not particularly good for photo taking.

In the ~2.5 hours I was at the fair, I saw three performances:

The first was a fun group called the Suitcase Shakespeare Company. They performed, “Shakespeare & Marlowe’s Greatest Hits (They Fight).” It was a delightfully irreverent duel of swords and verse between Christopher Marlowe and William Shakespeare. 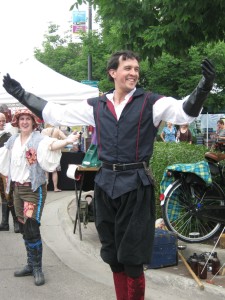 And then there was this guy:

Probably the one and only time I’ll hit the camera button at the right moment.

I’m not really sure how to explain his show. Except he did walk across a rope while juggling flaming torches, so that’s pretty cool. The best part was that he’d heckle anyone who walked between his “stage” and the audience. And that’s horribly rude, so they deserved it.

Finally, there was this guy:

I’ve seen this guy before, but that didn’t make him less awesome.

This was a guy dressed as a crow who balanced on a giant ball while juggling flaming torches. He had crow mannerisms down pretty perfectly (except the juggling part–to my knowledge, crows don’t juggle). He also performed small slight-of-hand magic tricks and wore a pretty wicked utility belt for his props.

By then I had seen all there was to see, and didn’t want to risk re-seeing anything I might consider buying, so it was time to go.

So what do you consider typical fair food? Do your fairs have any regional specialties?

One thought on “A Fair Day for a Faire”

Part job hunt blog, part travelogue, this site chronicles my journey to achieve my childhood dream of living and working in Chicago. Anyone hiring?